…in the Finest Tradition of the 1000 Islands

The Last of a Fine Breed
Built in 1897, the Thousand Islands Inn was one of more than three dozen hotels built to accommodate those who discovered what the beauty and serenity the 1000 Islands region had to offer. Located in downtown Clayton, adjacent to the train station and just across the street from the beautiful St. Lawrence River, made it among the most popular gathering places.

On May 12, 1997, just four days before it began its 100th Anniversary season, the Thousand Islands Inn was placed on both the New York State and National Registers of Historic Places. Four days later, as it opened for its centennial season, it was presented a Certificate of Special Recognition from the United States Congress House of Representatives, by Congressman John M. McHugh, declaring it one of the “Treasures of the North Country.” It was also issued a Certificate of Merit by New York State Senator Jim Wright, on behalf of the Senate, in recognition of achieving a century of service to the 1000 Islands region. 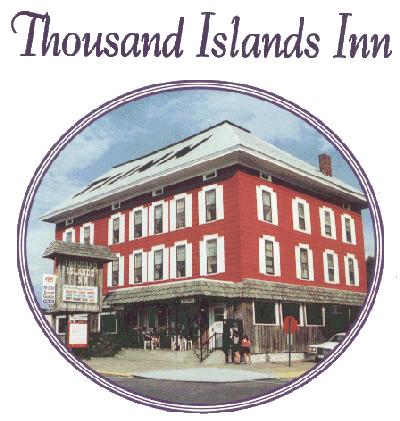 Today, the Inn stands alone as the last of the original great full service hotels. Its’ quaint rooms, completely renovated in a late 1800s Early American decor. The Inn’s dining room, the only national award winning dining room in the entire 1000 Islands, serves breakfast, luncheon and dinner. It features luncheon, Early Bird and gourmet dinner specials daily and is widely respected as one of the region’s finest. Many returning guests make reservations, even for breakfast!

Whether you relax in the dining room, where popular Thousand Island Salad Dressing was first introduced to the dining public, or spend an hour or two in the Inn’s comfortable and friendly lounge, you’ll quickly discover why the Inn is so popular. The camaraderie among locals and visitors alike is magnetic. You’ll also watch in awe the huge freighters from around the world that pass by, just off shore, in the St. Lawrence Seaway.

Just across the street from the Inn is Frink Memorial Park, the sight of many community events.

All of Clayton’s attractions are within a few blocks walk from the Inn.

Many visitors to the Inn opt for a fishing outing on board the Inn’s own charter boat, “A.B.’s Office.” Custom built to the demanding specifications of Inn owner Capt. Allen Benas, by an internationally known Florida boat builder, “A.B.’s Office,” was designed expressly for sport fishing the the 1000 Islands.

With the waters of the 1000 Islands now often referred to as “gin” clear, SCUBA diving is quickly becoming one of the region’s favorite passtimes. Thousand Islands Inn is at the forefront of this sport offering an array of diving packages on the St. Lawrence River, including dive master supervised wreck dives for divers of every experience level and unlimited waterfront bottle and artifact diving.

Serving the Traveling and Vacationing Public Since 1897

Location of the Thousand Islands Inn