Ogdensburg is proud of its numerous buildings, many of which are listed on the National Register of Historic Sites.

The U.S. Customs House was built in 1809-1810 as the Parish Store for David Parish, the first industrialist of the area. Parish contributed much to the development of Ogdensburg, and also promoted numerous other communities throughout the region, including Antwerp, Rossie, Parish, and Parishville. The construction of the Parish Store, a massive stone structure that stands today at 127 North Water Street, was supervised by master carpenter David Whipple Church.

Stone masons from Montreal and local indians were employed in the project. Church also built the Parish family home, now the Remington Art Museum on Washington Street. Parish contributed millions of dollars as a loan to the U.S. Government to help finance the War of 1812, much of which was fought adjacent to this building. During the Civil War the building served as barracks for the Massachusetts Company of Union troops protecting the northern border against raids by Confederate partisans. The building was purchased in 1936 by the Federal Government to serve as the U.S. Customs House. It is now known as the Robert C. McEwen U.S. Customs House, named in honor of the Ogdensburg native elected to Congress in 1965. McEwen served in Congress until 1981. 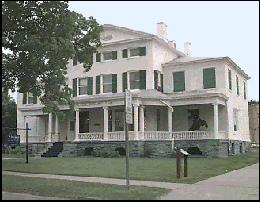 The Library Park Historic District is historically and architecturally important as an intact collection of 19th century buildings, encompassing 303 to 323 Washington Street and 100-112 Caroline Street. Parish purchased the area in 1808, building his home here in 1809-1810 as the center of an elaborate estate. Then known as the “Red Villa” the Parish home was built in the Federal style, and today is home to the Frederic Remington Art Museum. 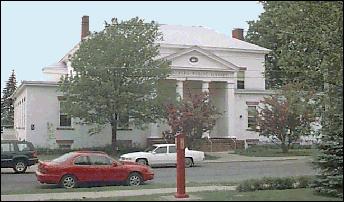 Across Washington Street from the museum was a large Victorian mansion that was remodeled in 1922 to resemble the Greek Revival residence that stood on the site in 1840. Some interior features, such as the staircase and some woodwork and fireplaces from the Victorian home were retained, and the building now serves as the Ogdensburg Public Library. The Library is surrounded by Library Park, a green space laid out in 1903. In 1905 the Soldiers and Sailors Monument was erected as a memorial to Civil War soldiers. The monument was designed by Sally James Farnham, an Ogdensburg native and sculptor.

The Augsbury home on Caroline Street is the largest of several homes built in the 1880s. It was built of a combination of Potsdam sandstone, clapboard and shingles, and has a variety of features associated with the Queen Anne architectural style. 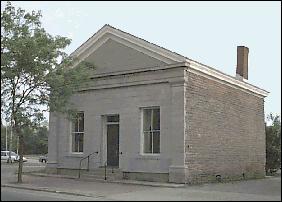 A Greek Revival style building was built at 315 State Street

A Greek Revival style building was built at 315 State Street, the site of the first bank in Ogdensburg. It has a rare surviving marble facade using locally quarried white marble, featuring a pedimented gable, cornice, corner pilasters and door with a three light transom. Over the years the structure served as a railroad ticket company and Express Company, law offices, and a real estate office.

An important example of 19th century civic architecture is the U.S. Post Office at 431 State Street. It was built between 1867 and 1870 after a design by Alfred B. Mullett, the Assistant Supervising Architect for the Treasury Department, designed to accommodate Federal postal, customs, and court facilities. It is a carefully proportioned neo-classical scheme based on Palladian design, with quoins, cornice and pediments at roofline. Built of Berea sandstone from Ohio, and blue cut limestone, it is characterized by interior structural and decorative elements of iron. Notable interior features are marble floors and fireplace mantle, decorative iron doorframes and white ash woodwork. The second story Federal courtroom is of particular significance, with its ornate original plaster arcade and mouldings. The cost of construction was set at $265,000, including furnishings. 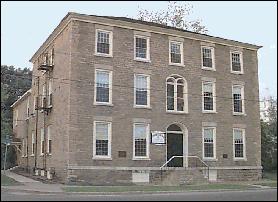 This house, built in 1800, was the home of Preston King, a prominant Ogdensburg politician. and a founder of the Republican Party. He served in the New York State Assembly from 1835 to 1838. He became the first Ogdensburg native elected to congress in 1843, serving there unitl 1853. He became a U.S. Senator in 1857, serving until 1863. In 1865 he was a presidential elector, and collector for the Port of New York. King studied law with Louis Hasbrouck and John Fine.