“A nice place to spend a day or a lifetime!”

The region is dotted with lovely dairy farms, picturesque walking trails, and acres of state and county recreational lands. You can see a unique covered bridge, Southwick’s Beach State Park with its big, beautiful sand beach, and lovely parks along the scenic routes, including the Seaway Trail. Washington Park greets you with several walking trails.

South Jefferson is also noted for excellent fishing, and Salmon fishermen can be readily found casting in area streams for that trophy fish!

South Jefferson is supported by agricultural industry, dairy farming in particular, so it is not surprising that you’ll find world championship cheese manufactured here. Nineteenth century life in an agricultural setting is also depicted by local museum displays.

The four-season communities of South Jefferson do not rest in the winter. This region is noted for massive snowfalls, receiving “lake effect” snow storms throughout the winter months, due to our location just east of Lake Ontario. Once you’ve sampled the notoriously ample snowfall of the Tug Hill area, in fact, winter will just never be the same again. If you love snow, you’ll love Southern Jefferson County like no other place on in the Northeast. Vast areas of forested land, numerous rivers and streams, and miles of remote unplowed back roads are blanketed with a thick layer of the white stuff all winter long. 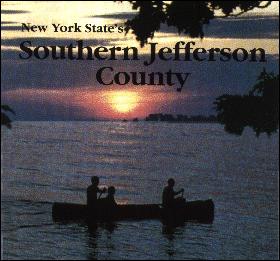 Hundreds of miles of interconnected snowmobile and dog sled trails criss-cross this part of Jefferson County. And cross-country ski trails abound throughout the region, ranging from a 31 mile network at Tourathon to a compact 4 miles in Washington Park. Our annual sled-dog races are a two day event, the Tug Hill Challenge. This major event is usually held the 2nd weekend in February, and attracts teams from New York, Pennsylvania, New Jersey, Ohio, Connecticut, Vermont, New Hampshire, Maine and Massachusetts, as well as all parts of Canada.

The village of Adams is the birthplace of J. Sterling Morton, the father of Arbor Day. Quiet streets are heavily tree-lines, so every season is a tribute to Morton. In April the quiet town gives way to the celebration of the Arbor Day Festival. Bargain hunters should mark the first Thursday and Friday in August each year as a time to visit this area. With over 150 Yard Sales, Business Bargain Days, and a huge Flea Market and Craft Fair, South Jeff hosts the largest rummage sale event in New York State.

Several hundred businesses serve the communities of Southern Jefferson County. Most are small hometown businesses, and all are worthy of your patronage. Be sure to consult our South Jefferson Area Wide Business Directory to find member businesses ready to serve your every need.